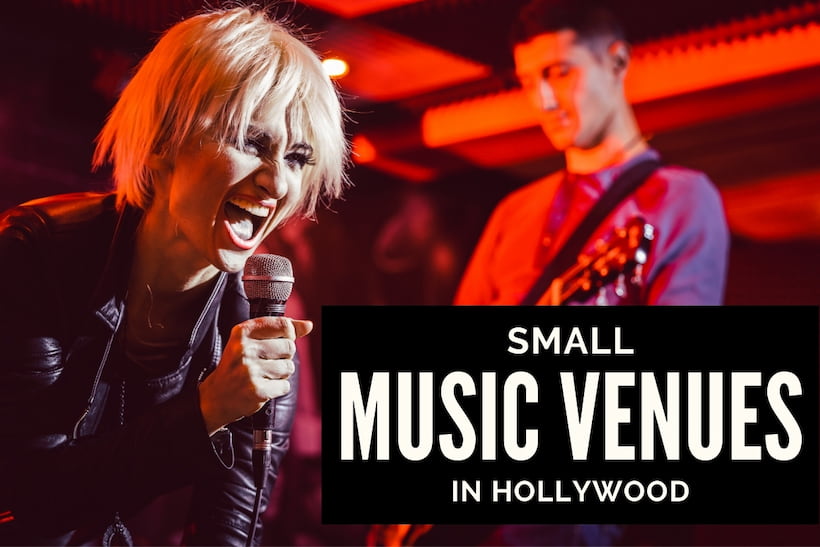 While going to a show in a venue like the Crypto.com Arena is fun, nothing beats the intimacy of a small venue for live music. These smaller venues have launched many successful music careers and are a fantastic way to discover new talent. These venues range in size from hosting around 100 guests to 1,200 guests. They all focus on fresh, live music and innovative bands.

Some venues offer food and drink, but you might want to grab a bite before or after the show. Check out our list of trendy places to eat in Hollywood, CA so that you can fill up before or after your music experience.‍

The Hotel Cafe has provided a unique, small setting for live music events for over 20 years. The Hotel Cafe is known as a breakout room for emerging artists. This intimate venue has hosted well-known stars during their early careers. Artists such as Katy Perry, Adele, Mumford and Sons, Billie Eilish, Ed Sheeran, and Sarah Bareilles have all performed at The Hotel Cafe.

The venue has two stages that run at the same time. The Main Stage is the more significant setting; it can seat 40 people and has a total capacity of 215 people, and the Second Stage holds 75 people and can seat 25 people.‍

The Troubadour Club in West Hollywood has been legendary since it first opened its doors in 1957. This small venue has helped launch renowned artists such as Tom Waits, James Taylor, and Elton John. Bob Dylan played for the staff here in 1964 before debuting his folk-rock music. Joni Mitchell played here in 1968, and Billy Joel opened here in 1972.

The Troubadour provides a historic, cozy setting for music fans seeking cutting-edge acts. The venue has a capacity for 500 fans, standing room only.‍

The Fonda Theatre originally opened as Carter De Haven's Music Box in the 1920s. Throughout the decades, it has been a venue for eclectic music and theatre acts. Iconic performers such as Pearl Jam, The Rolling Stones, Black Eyed Peas, Stevie Wonder, Katy Perry, Esperanza Spalding, and Alabama Shakes have performed here. In addition, the venue hosts other events such as private parties, bat/bar mitzvahs, and film shoots.

The venue hosts modern musical acts such as Willow Smith and Olivia O'Brien.

The Mint has been in business for over 80 years and has hosted live music events for decades. The Mint has hosted artists such as Stevie Wonder, Ray Charles, and The Wallflowers.

The Mint hosts live music most nights, and visitors can enjoy food and drinks on site. The Mint has a capacity of just 130 people and is one of the most intimate locations in the area.‍

The Whisky, a Go-Go, opened on the Strip in 1964 and has thrilled live music fans ever since. The Whisky, a Go-Go, has featured legends such as The Doors, Led Zeppelin, and Janis Joplin. Today, it hosts up-and-coming artists and established acts in this intimate, world-famous location.

This music venue is all ages and family-friendly. It has a capacity for 500 music listeners and serves food and drink.

These small music venues in Hollywood, CA, have a lot of fascinating history. Dig further into the area and check out the glamour of the Hollywood Hotel History.