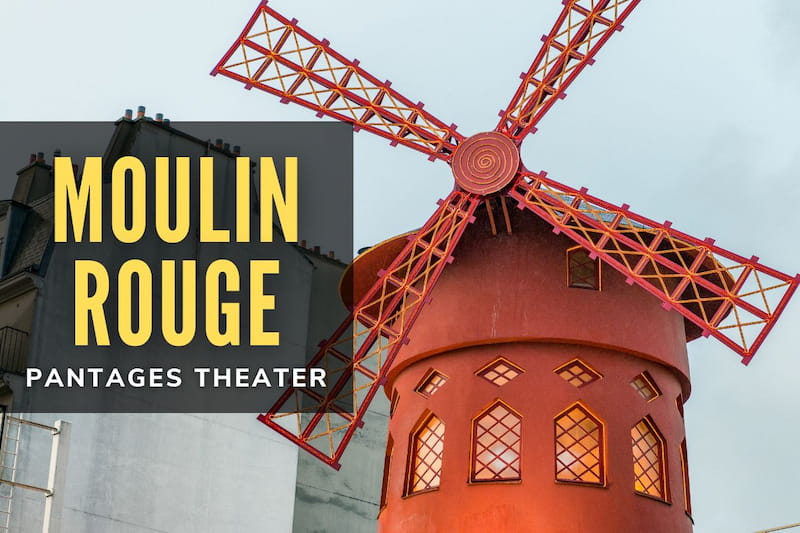 Moulin Rouge! The Musical is playing all summer long at Los Angeles Pantages Theatre. This award-winning show is packed with spectacular costumes, music, and state-of-the-art production values. It celebrates life and love and is sure to delight you.

Moulin Rouge! plays at the Pantages Theatre from June 30th through September 4th. Ticket prices start at $39, and the show runs for two hours and 45 minutes. Children under five years old will not be admitted, and the show is recommended for children over 12. Moulin Rouge! runs every day except for Mondays, with additional showings on the weekends.

Moulin Rouge! The Musical has won ten Tony Awards, including Best Musical. The theater production is based on Baz Luhrmann’s 2001 vibrant film.

The show is set in the Moulin Rouge cabaret in Paris in 1889. The Moulin Rouge is a historic location that has brought together performers with guests from all walks of life. The film and musical versions have brought the Moulin Rouge's fun and adventurous spirit to audiences around the world.

In the musical, a young composer, Christian, falls in love with the star of the Moulin Rouge cabaret, Satine. The musical features original songs from the movie and new, more recent popular songs. With 70 chart-topping songs, you are sure to leave the show singing and dancing.

The show focuses on the ideals of truth, freedom, beauty, and love. The music keeps coming, and the musical’s songs often feature mash-ups of several hits. For example, Satine strings “Diamonds are a Girl’s Best Friend,” “Single Ladies,” and “Material Girl” into one spectacular hit.

Moulin Rouge! The Musical offers guests a wonderful dose of escapism. The costumes are gorgeous, the music is fantastic, and the love story is a tale as old as time.

The Pantages Theatre is one of LA’s most prestigious theatres. It opened in 1930 and features a gorgeous Art Deco facade.

The theatre originally showed new movies and vaudeville acts. Howard Hughes purchased the theatre in 1949 and had an office on the second floor. Over the next decade, the theatre hosted ten prestigious Academy Awards Presentations.

In 1977, the theatre stopped showing movies and started focusing on live theatre productions. In 2000, the theatre was renovated to recapture its luxurious 1930 style. Today, Pantages Theatre features world-class productions in a historic location. The theatre is one of the most popular Hollywood photo spots.

Moulin Rouge! The Musical is one of Broadway’s most beloved productions, and you can see it in sunny California. Hollywood is known for its world-class entertainment as well as its exceptional hospitality. If you’re visiting Hollywood, and are looking for a nice Los Angeles hotel with parking come stay with us where you can experience style and convenience in the heart of Hollywood.