5 Fun Things to Do in Hollywood at Night 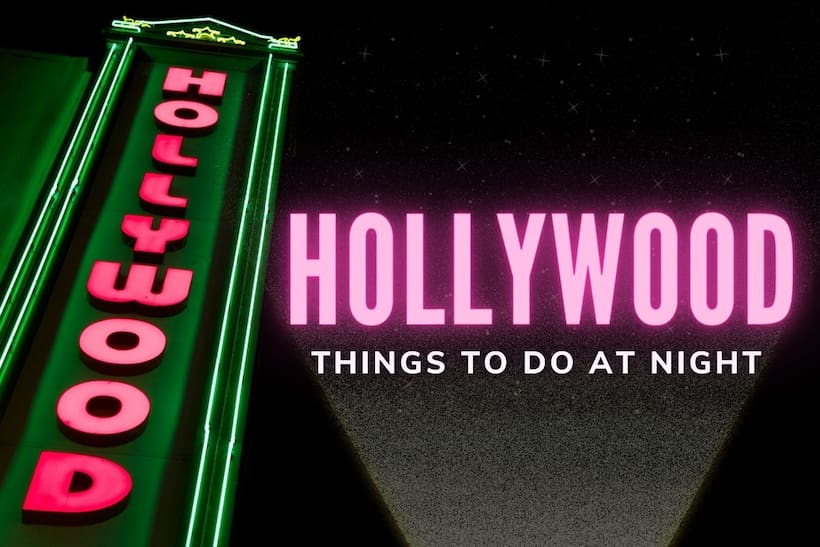 The Hollywood entertainment scene is just getting started when the sun goes down. California's iconic sunshine is replaced by a thrilling nightlife scene where you'll never be far from an exciting club or live show.

Ideas for Things to Do in Hollywood at Night

This world-class entertainment destination offers nightclubs, improv clubs, bowling, magic shows, and escape rooms. You can dance, laugh, and have fun from sundown to sunrise. While experiencing Hollywood's nightlife, keep an eye out for past, current, and future stars. You never know who you might run into!

Playhouse is a massive nightclub that focuses on hip-hop. The venue is 13,000-square feet, and La Cultura headlines on Thursday nights with a reggaeton, hip-hop, and Latin mix. There's a different act every Friday and The Scene on Saturdays. Be prepared to dance and party the night away at Playhouse.

Playhouse is a modern nightclub that's fun and high-energy. Costumed employees keep the fun vibe going, and aerialist performances entertain. Be sure to dress to impress to gain entry into this high-class nightclub.

In addition, you can order drinks from the bar or food from the next-door Thai takeout. The cocktails are unique and creatively blended. The Black Rabbit Rose is cozy, and the service is friendly.

Lucky Strike offers the perfect combination of fun and relaxation. Guests can challenge their friends to a friendly bowling match and try to beat a favorite celebrity's score. The bowling alley has 12 lanes, and Lucky Strike often features live music. Relax in the lounge with a signature cocktail or order from the full menu.

Lucky Strike Hollywood was seen in a 2008 episode of America's Next Top Model. For more behind-the-scenes Hollywood intrigue, check out these Hollywood hidden gems.

Hollywood Improv offers a great way to kick back and laugh or cry with Hollywood's most talented improv artists. Improv started in the 1960s in its original New York City location. Improv was one of the best places for emerging stars such as Bette Midler and Dustin Hoffman to get noticed.

Improv Hollywood was founded in 1975, and Jay Leno helped paint the ceiling. The early staff was emerging actors such as Jim Carey, Judd Apatow, and Debra Winger. The famous "An Evening at the Improv" show was taped here in the 1980s.

Today, visitors can enjoy hysterical comedy and various shows with emerging actors at Improv Hollywood. Improv Hollywood offers several different shows a day, so you are sure to find something up your alley or discover something or someone new.

The 60out Hollywood offers thrilling escape rooms designed for adults. In these escape rooms, you'll race against the clock to solve puzzles and mysteries before the time runs out. Each escape room has a 60-minute time limit.

When you book an escape room at 60out Hollywood, you'll book the entire room for just your group. Then, you'll work together to figure out the clues and solve the mystery. Escape Rooms themes are fun, scary, or adventurous.

Hollywood is known for its world-class entertainment. Keep up with all the excitement and news with The Hollywood Times.