Check Availability
Book RoomBook Meeting
Thank you! Your submission has been received!
Oops! Something went wrong while submitting the form
Reservations 323-746-0444 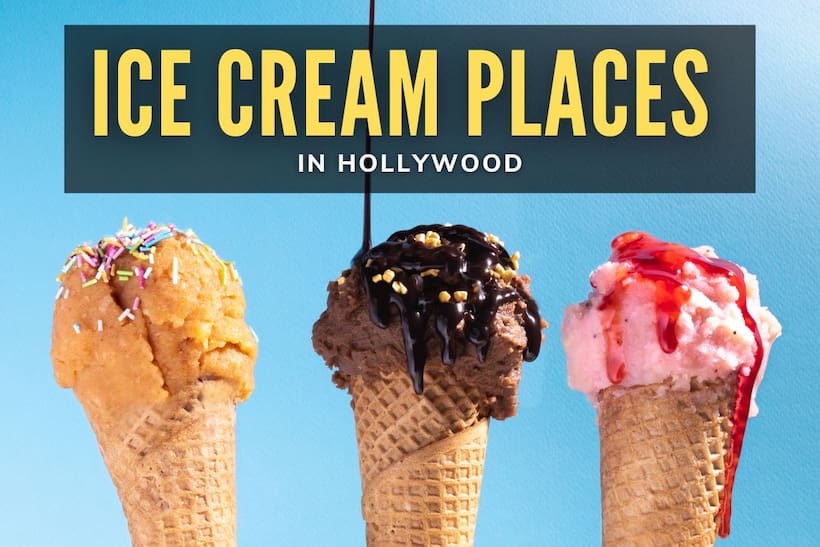 Maybe you're sitting around, having found where to watch the sunset in Hollywood with a great view, and you realize that the long day has taken its toll. Or, maybe the sun is shining, and a day at the beach has got you feeling a little overheated. Do you know what would be good right about now? Of course, you do--ice cream!

Everybody loves ice cream. But, what with this being LA and all, the best ice cream places in Hollywood are a little more than you might expect. Our shops have decided creations, refreshing new flavors, and chef-centric takes on classics. Here are the best six shops to try out while you're here.

Chimney cakes are spun, hollow cinnamon cakes that are particularly popular in Prague. Turn Dough brings this unique European tradition to LA and makes their chimney cakes daily in-store. But if that isn't enough to get your mouth watering, the chimney cone creations will blow your mind. So for a little taste of Europe, don't miss the Nutella Dream, the Ferrero Rocher, or the Biscotti.

Turn Dough also has an amazing selection of shakes that are just as decadent. S'mores, Matcha, Brownie, or Birthday Cake, anyone? Turn Dough has two locations, one on the Hollywood Walk of Fame and one on the famous Venice Beach Board Walk.

Mashti Malone's is known for their exotic flavors that harken back to the founder's Iranian roots. Their most famous creation is the Rosewater ice cream or sorbet. Other exotic flavors include French Lavender, Persian Cucumber, and Herbal Snow Sorbet. Classics like Alphonso Mango, Date, or Matcha Green Tea will also surely hit the spot. Flavors are sold by the scoop or try the Mashti Special, which is one scoop served between two crunchy wafers.

Mashti Malone's has two locations, one in Hollywood on La Brea Avenue and one in Westwood.

Dear Bella has scooped out all-natural plant-based ice cream since 2017. Their chef-driven menu shows that vegan ice cream has no boundaries. It is all made from scratch in-house, with no artificial colors or sweeteners. They also have nut-free and gluten-free choices.

Flavor choices are always changing with the seasons, so count on some delicious choices every time you stop by. For a taste of something new and special, don't miss the Taiwanese Pineapple Cake, Black Sesame, or Hong Kong Milk Tea. Classics include the Marble Cheesecake, Peanut Butter Cup, and Rocky Road. Their delicious creations also include soft serves, sandwiches, shakes, and sundaes.

Salt & Straw is a growing chain of specialty ice creameries with shops on the West Coast and in Florida.

Be sure to check out their seasonal varieties, as well. Summer is a great time to visit Salt & Straw for fresh berry creations like Wild-Foraged Berry Slab Pie or Goat Cheese Marionberry Habanero.

The local Salt & Straw shop is located in Larchmont Village.

Holy Roly claims to make the "most epic" desserts in Los Angeles. Their ice cream cups are unique--a base layer of ice cream or frozen yogurt is rolled thin and rolled up like a cinnamon roll. Toppings are added to make a delicious treat bursting with flavor.

Try the Tiramisu with a coffee ice cream base, tiramisu cake, and cocoa powder. Or perhaps the Mango, with mango base and chunks of mango on top. Flavors are unique and range from decadent to refreshing.

Holy Roly has three locations, one in Korea Town on West 6th Street, one on Melrose Avenue, and one in Arcadia.

Afters made its name with an ice cream stuffed donut called the Milky Bun. Today they have over 25 locations in SoCal with smashed-up cups of delicious creations. The Thai Tea, Cookie Butter, Jasmine Milk Tea, and Dark Matter Brownie Batter are worth a try!

Cool Off with the Coolest Treats Around

Now that those titillating flavors have refreshed you, it's time to book one of those Los Angeles tours with hotel pick up you've been waiting for. So get out there and explore this amazing town, and maybe go back for another flavor at the ice cream shop when you're done.