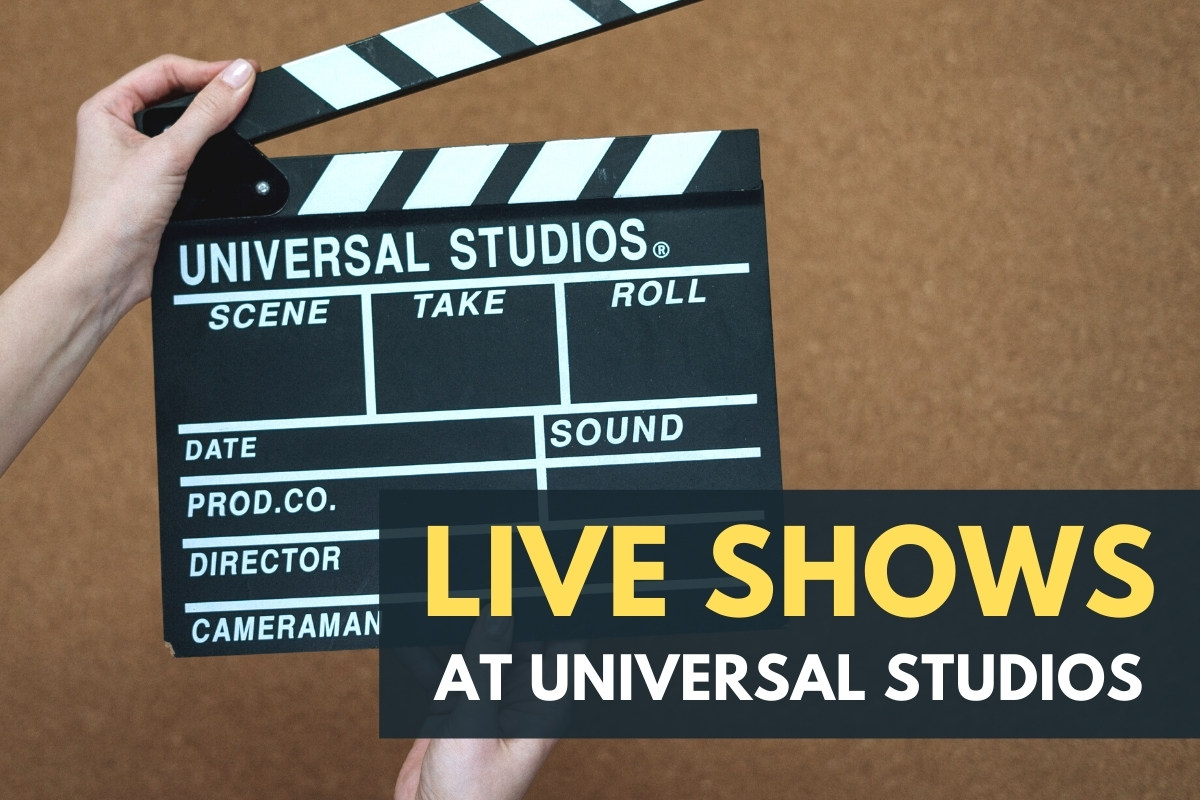 Visiting Universal Studios takes you behind the scenes of the movies you know and love in a way you would never imagine. The various rides, attractions, and themed areas within the theme park help you relive your favorite movies! Have you ever wondered how movies are made? Universal Studios shows you how they do it through a variety of live entertainment options. Here’s what you’ll experience when you see live shows at Universal Studios Hollywood.‍

This 20-minute stunt show is jam-packed with everything from explosions to jet skis. It’s a crowd favorite, so be sure to grab your seat early! The set from the 1990s film WaterWorld® is the backdrop for real Hollywood stunt actors to show off their daring feats. The show features a mix of water and land-based stunts, including dives, firefights, jet skiers. Some explosions create 50 foot high fireballs and plane crashes, so what more could an action-movie lover ask for? The show was updated recently for even more adventure.‍

This show goes in-depth about the various special effects that make movie magic real. Professional Hollywood stunt actors use stunts, cutting-edge technology, and other effects to give you a behind the scenes look at how movies are made. There are live demonstrations of horror movie makeup effects, fight scene tricks, and zero-gravity stunts. There are also chances for the audience to participate in the action!‍

Humans aren’t the only stars of the show when it comes to making movies! The furry friends that make our beloved movies great are showcased during this one-of-a-kind performance. These Animal Actor stars have been featured in films like “Evan Almighty,” “Night at the Museum,” and “Ace Ventura.” Watch as handlers guide animals as they reenact scenes from the movie “The Secret Life of Pets.” The kids will love this show! Fun fact: many of the animals in the show are rescues.‍

There are other shows you can experience as you stroll through the themed areas at Universal Studios Hollywood. Here are some of the entertainment options you may come across during your day at the park:‍

The Wizarding World of Harry Potter™‍

Several shows take place at Hogsmeade™ inside the Wizarding World of Harry Potter™. See the students of Durmstrang and Beauxbatons cheer on their school champions at the Triwizard Rally. Or, enjoy the musical stylings of the a capella Frog Choir who can be seen roaming around the streets of Hogsmeade™.

At night, Hogwarts™ castle magically transforms with two projection light shows set to the movie series’ famous musical score by John Williams. One show highlights the four different Hogwarts™ houses while the other reveals what would happen if the Dark Arts took over the castle.‍‍

You may just come across a triceratops or a baby raptor as you make your way through Jurassic World located on the park’s lower lot. See your favorite dinos from the Jurassic World series, including Blue—everyone’s favorite raptor during the show. Experience what visiting Jurassic World would be like when you watch handlers care for these prehistoric creatures.‍

There are even more entertainment options when you visit Universal Studios during the holidays. Celebrate the season down in Who-ville with Universal’s Grinchmas™ spectacular. There is also a special holiday projection show on Hogwarts™ castle during the season.‍

Stay and play at the Hollywood Hotel‍

Book your stay at the Hollywood Hotel and receive special pricing at our hotel near Universal Studios Hollywood. Visit our website for details and current package availability!