Stop And Smell The Roses After The Tournament Of Roses 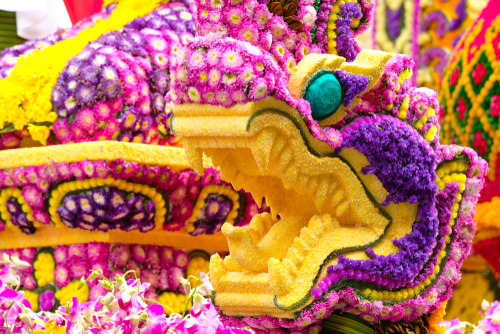 An estimated 18 million flowers float down the avenues every first of the year for the annual Tournament of Roses Parade in Pasadena. And whether you've watched the spectacle on the television, or in-person under the sunny winter skies, it's impossible to get a close look at the intricate handiwork of thousands of craftsmen and women. So get your ticket to the after-show! Following the parade, and 1 pm on the 1st and 9 am on the 2nd, you can walk within feet of the floral and animated masterpieces that get parked along Sierra Madre and Washington boulevards.  Better still, tournament volunteers, called White Suiters will be standing by to satisfy your curiosities. Wonder how long it takes to decorate one float? Not including design and construction, it could take 60 people working 10 hours, 10 days. So don't let all the details go unseen--come stop and smell the flowers!